January was busy with getting back into the swing of work after the Holidays and wrapped up with the arrival of the new Stampin' Up! Spring/Summer 2009 Catalog. I was thrilled to see a new coffee-inspired stamp set!

So, of course, when it came time to make swap cards for next weekend's stamp gathering - I turned to the coffee set "Sip by Sip" and used this as an opportunity to also try out the new Stampin' Up! Texture Plates for the Big Shot. 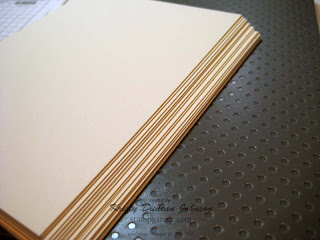 I stamped the "3 cup" image multiple times in Basic Gray classic ink on Very Vanilla cardstock ... a bit of an assembly line approach. I colored the cups for the final cards but like the simple gray & vanilla look, too ... gives me ideas for future projects. 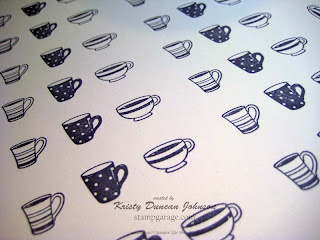 After coloring the cups with Cameo Coral and Tempting Turquoise markers, I punched out the cups using a 3/4" Circle Punch. 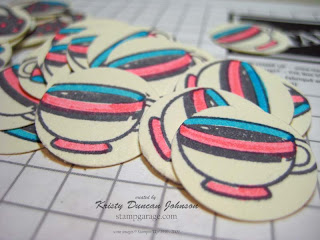 I added a lil' depth to the card by placing the punched cup images on the front of the card using Stampin' Dimensionals. (You can see a bit of the texture in this shot, too.) 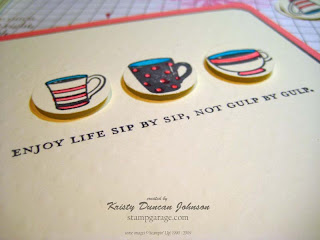 Ta-dah! A stack of cards ready for next week's card swap. The card fronts are mounted on Basic Gray and Cameo Coral cardstock. I rounded the corners using the small corner rounder punch. 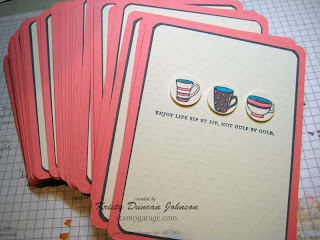 Time to enjoy a cup! 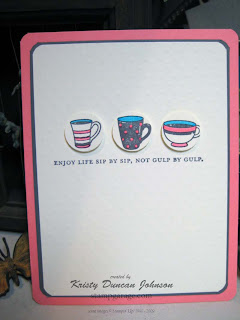 You can contact me at:
stampgarage (at) gmail (dot) com

All content, including text, photographs, and concept design, are © Kristy Duncan Johnson. They are shared to spark ideas and for personal use only. Some images © Stampin'Up! 1990-2013